I loved working with Caroline and Donald on their wedding day! These two love birds came down from Virginia Beach to tie the knot at The Pavilion at Pirates Cove Marina on Saturday August 1, 2015. To start the ceremony we had the wedding party come down to “Somewhere over the rainbow” by Israel Kamakawiwo’ole. Caroline then processed to “A Thousand Years” by The Piano Guys. It was a very magical and beautiful day for a wedding says “The Outer Banks officiant.” Family and friends cheered as these guys were guided through a smooth exchange of vows given by Rev. Rande Banks. As the ceremony concluded Caroline and Donald were announced as the new Mr. and Mrs. Long. I played a special song for the recessional, “I choose you” by Sara Bareilles. 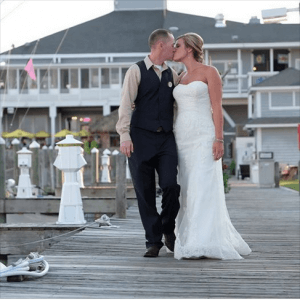 Scott Hayne with Hayne Photography took all the members of the wedding party out for pictures while guests enjoyed cocktails and appetizers provided by Sweet Water Cuisine. The room was absolutely gorgeous and decorated in mint blue, navy, amethyst, and burlap, thanks to Renee Landry with Renee Landry events. 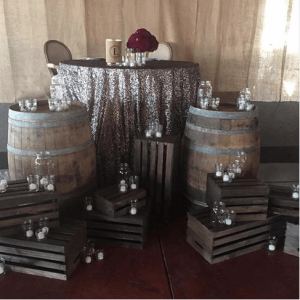 With music being very important, we worked hard to create a special playlist for this wedding reception. Caroline, Donald, and their daughter Rylee, all love Disney. So we put together a Disney themed cocktail hour. For the Introductions we brought in the wedding party to “Bring em out” by T.I. then for the bride & groom we played “Marry you” by Bruno Mars. While Caroline loves hip-hop, Donald loves country music. So, after the intro’s they had their first dance to “Love Your Love The Most” by Eric Church.

We seated everyone for dinner and then Donald and Rylee came out and had a father/daughter dance to “Cinderella” by Steven Curtis Chapman. Caroline danced with her father to “Grillz” by Nelly as a joke, then we ended it with “My Wish” by the Rascal Flatts. Donald danced with his Mother to “You raise me up” by Josh Groban. After all the traditional dances we did the cake cutting. In addition to the cake there was a gelato bar for guests provided by Debra Sinkage from Icing on the Cakes.

As an Outer Banks DJ I enjoyed playing all of their favorites that included a dollar dance to “Show me the money” by Petey Pablo. Everyone got the opportunity to come up and dance with Caroline and Donald as the matron of honor, Brittany, collected the money. For the bouquet toss Caroline chose “Dear Future husband” by Meghan Trainor, then Donald removed the garter to “Danger Zone” by Kenny Loggins. All the traditional events were awesome and these guys had a great time celebrating their Outer Banks Wedding in style! We ended with “(I’ve Had)” The Time Of My Life” by Bill Medley & Jennifer Warnes. Congratulations to the new Mr. & Mrs. Donald Long. Thank you for letting Coastal DJ & Video to be a part of your special day!