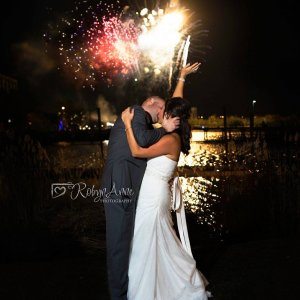 Brooke and Chris had their Wilmington Wedding on Saturday November 19, 2016 at The Coastline Conference & Event Center. The room looked gorgeous as it was decorated in navy, with accents of plum and blush pink.

We played a mix of contemporary Vitamin String Quartet songs as guests arrived. Once the wedding party was ready to enter, they descended from the staircase to “Royals” by VSQ. Being a big Tom Petty fan, Brooke chose “Angel” for her processional. Brooke and Chris said their vows and were pronounced Mr. & Mrs. Chris Vallely. The couple chose “Can’t feel my face” by VSQ for their recessional.

For cocktail hour guests enjoyed hors’ d’oeuvres provided by Zack Cain and staff with Bon Appetit while Robyn Barnes with Robyn Anne Photography took the wedding party for photos. We have a couple of great photos to show from this wedding and can’t wait to see more!

The wedding party was lined up to be introduced from the top staircase to “Welcome to the Jungle” by Guns & Roses. The crowd went wild as Brooke and Chris were announced into the room for the first time as husband and wife. Mackenzie Watson with Southern Charm Events & Planning did an excellent job with the coordination and helped tremendously with making sure everything stayed on track.

After dinner we had a cake cutting and a couple of great toasts given by the best man and matron of honor. Rock Mora was introduced to John Cena’s  WWE “The Time is Now” which was such a hit. Rachel Bridgers was introduced to “24K” by Bruno Mars that everyone loved. Everyone raised their glasses and cheered as we prepared for all the special dances.

Brooke and her fathers best friend, John McNally, shared a dance to “Somewhere Over The Rainbow” by Israel Kamakawiwo’ole. Chris and his mother danced to “He wants to get married” by Reba McIntire for the Mother/Son dance. Chris and Brooke had their first dance to “Wonderful Tonight” by Eric Clapton. 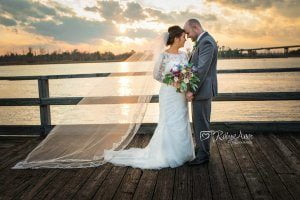 After all the special dances the dance party began. Being mostly a Philly crowd we played lots of cool songs, but what got everyone pumped was the Go! Cubs! Go! theme song. There was Elton John’s “Philadelphia Freedom”, “The Rocky Theme”, “Paradise by The Dashboard Light”, and many more. We ended the night to “You Are The Best Thing” by Ray LaMontagne. We lined everyone up for the sparkler exit out front to send the couple off for the after party. Congratulations to Mr. & Mrs. Chris Vallely. Thank you for choosing Coastal DJ & Video for your entertainment.