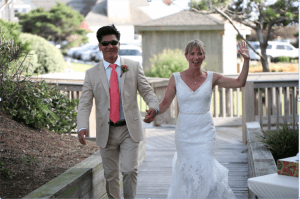 Angela and Gary celebrated their Outer Banks wedding at The Sanderling Resort on Thursday July 30th in Duck, N.C. The weather was amazing after a late afternoon shower rolled through to cool things off a bit. After a nice ceremony on the Main Inn Deck, the guests headed over to the Event Home while the bride and groom made their way over the dunes to get wedding photos taken by talented wedding photographer Ryan Diegelmann with Coastal Shots Photography.

The wedding party and the newlyweds were announced during the cocktail hour to a roar of applause from the guests. Gary and Angela mingled a bit with their families and friends, and then everyone headed inside for dinner. After dinner the traditional dances included first dance for the newlyweds, and Angela shared a dance with her father. 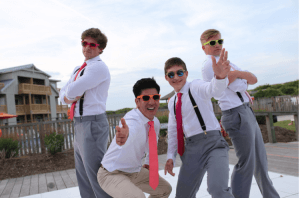 Then dance party was underway outside on the Event Home Deck. The groom and his groomsmen surprised everyone with a choreographed performance to Backstreet Boys’ “Everybody” to kick off the fun. Guests enjoyed the sounds of music from more than six decades echoing off of the sand dunes during the dance party. The party continued long after the sun went down; this crowd was unstoppable! Congratulations to Gary and Angela Suzuki! As an Outer Banks DJ I truly enjoyed being a part of your wedding reception. Thank you for choosing Coastal DJ and Video.