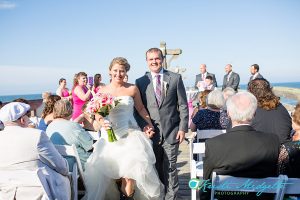 Cheala and Stephen Hopkins were married this past weekend on Saturday June 6, 2015 at The Kitty Hawk Pier House. Their ceremony took place out on the pier overlooking the Atlantic Ocean. Family and friends witnessed a beautiful service delivered by officiant Tanya Young with Outer Banks Wedding Officiants. We played a couple of pre-seating songs for everyone to be seated, then began the bride’s processional with “Bridal Chorus” by Richard Wagoner. The vow exchange was given and Cheala and Stephen were pronounced husband and wife. The couple recessed to “Somewhere over the rainbow” by Israel Kamakawiwo’ole.

Cocktail hour was held out on the pier and also inside the Kitty Hawk Pier house. The room was nicely done up with beautiful floral arrangements by Shelley Boyer with Honeysuckle events. Guests enjoyed drinks and appetizers as Cheala and Stephen were taken for pictures with Kristi Midgette Photography. Coastal DJ & Video provided Photo Booth services for this event along with a nice guests book of all the images of guests to remember this wonderful day! The Photo Booth was one of the highlights of the night, so much fun.

After pictures we lined up the wedding party for introductions. We introduced the families and wedding party into the room to “Bring em out” by T.I. – then had the official introduction of the bride & groom to “Turn down for what” by DJ Snake & Lil’ Jon. Cheala and Stephen’s first dance took place to “Feet don’t touch the ground” by Stoney LaRue followed by the father/daughter dance to “I’ll be there” by Josh Turner, and finally the Mother/Son dance to“A song for my son on his wedding day” by Micki Veirick. Great song!

As soon as the traditional dances were complete we announced that the buffet was ready. There was a fabulous dinner prepared by The Hilton Garden Inn staff! After dinner we had a few toasts given by the maid of honor and best man. The cake cutting took place just after the toasts were made and we played “Sugar Sugar” by The Archies while some nice photos were taken of the couple. The bouquet and garter toss was arranged to take place after the cake cutting so that we could kick off the dance party. Cheala tossed her bouquet to “Single Ladies” by Beyonce while Stephen hopped back down on one knee to remove his garter to “Let’s get it on” by Marvin Gaye, a great song to get everyone’s attention.

The dance floor was opened up after all the traditional events and stayed packed the entire night while guests continued to make their way in and out of the Photo Booth. If you’re looking for something really fun for your Outer Banks event that will entertain your guests beyond words, consider renting a Photo Booth for your event. The Photo Booth was so much fun and it’s nice knowing that the bride & groom have those fun photos of their guests to look back on for years to come! Congratulations to the new Mr. & Mrs. Stephen Hopkins on your marriage. We would like to thank you for letting us be a part of your Outer Banks wedding. Cheers!

Over the years, we’ve rocked several weddings at the Kitty Hawk Pier. Click the links below to read more about their special days: