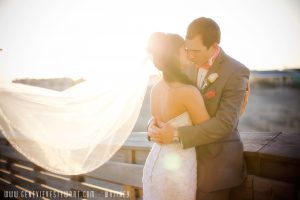 Haley and Gene became Mr. and Mrs. Gene Efird III on Saturday April 4, 2015 at Jennette’s Pier in Nags Head N.C. The ceremony took place out on the pier overlooking the Atlantic Ocean with family and friends to witness their vows. Coastal DJ & Video were there to capture these special moments! We played a few pre-ceremony songs as guests made their way to their seats. The Mothers and Grandmothers walked down the isle to “A Thousand Year” by Christina Perry. The Groom’s processional was to “Canon in D” by Pachelbel. Haley and her father came down to “Marry Me” by Train. As always Rev. Jay Bowman delivered a great service for this beautiful couple.

After the ceremony the wedding party was taken for pictures while guests made their way up to the Pier House for cocktail hour. We lined up the wedding party for introductions and Haley and Gene made their grand entrance into the room for the very first time as husband and wife. Haley and Gene chose “Celebration” by Kool & The Gang for the wedding party entrance, then for their entrance we played “This will be” (an everlasting love) by Natalie Cole. The room lit up with applause and excitement for the newlyweds! Once the introductions were done there was a welcome given by Haley’s parents, David and Pam Smith followed by a blessing from Shane Stanley. Dinner took place buffet style with food provided by Café Lachine. Shortly after dinner we had the toasts given by the maid of honor, Lauren Cook, Matron of honor, Heather Hammaker, and finally the best man, Gabriel Lowder. The cake cutting was done to “How sweet it is” by James Taylor. 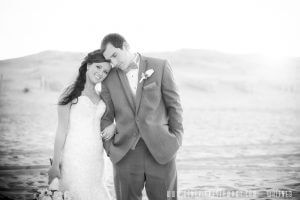 All the first dances were done back to back after the cake cutting. The first dance choice was to Hunted Hayes “Wanted,” followed by the father/daughter dance to “Butterfly Kisses” by Bob Carlisle, and finally the Mother/son dance to “Do I make you proud” by Hicks Taylor. Everyone seemed to love all the songs chosen by Haley and Gene during open dance time and as the DJ for this event I enjoyed rocking some great tunes for all the guests. The last couple of songs played were “Don’t stop believing” by Journey, and finally “I’ve had the time of my life” from the Dirty Dancing soundtrack.

Congratulations to Haley and Gene Efird III. We loved being a part of your wedding and thank you for the opportunity to help with your music and video!