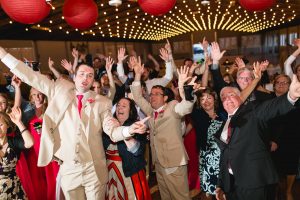 Sarah and Travis tied the knot on Saturday May 2, 2015 at The Pavilion at Pirates Cove Marina. What a gorgeous day it was to have a ceremony out by the marina. Blue skies filled this day along with family and friends to witness the joining of two special people that had planned the perfect Outer Banks Wedding!

Tony Joseph was the officiant for Sarah and Travis’s OBX ceremony. As always he delivered a great service. We played some nice pre-seating music as all the guests arrived to take their seats. The bride’s processional was “Canon in D” by Pachelbel. After the exchange of vows and Tony pronounced Sarah and Travis as a married couple they recessed to “All of my Love” by Led Zeppelin. Such a great song!

Guests made their way into the Pavilion for cocktails and appetizers as the newlyweds were taken for pictures. Once cocktail hour was over we lined up the wedding party to be introduced to “Start me up” by The Rolling Stones. Sarah and Travis chose one of the coolest songs to be introduced. It was “Wilson” by Phish. The crowd went absolutely wild as they made their grand entrance.

The first dance took place to one of the best songs out this year, “Thinking out loud” by Ed Sheeran. Dinner was served by Kelly’s restaurant and catering. If you’ve not had any of the food or experienced their awesome menu, look them up! Once dinner was complete we did the toasts followed by the cake cutting. We played “Moondance” by Van Morrison for the cake cutting. Sarah and her father came out to the dance floor to “Just Fishin” by Trace Adkins. Travis and his mother danced to Lee Ann Womack “I hope you dance.”

We opened up the dance floor after all the traditional events took place! This crowd was so fun to entertain. Sarah and Travis had a great playlist to go off of and Coastal DJ & Video incorporated a few extras to keep the crowd live! The guests had such a great time dancing that we were requested to stay an extra hour. No one wanted to stop dancing and it makes us feel good to know that as being an Outer Banks DJ, we were doing our job! The best part of the night was the last dance. We played “Take me home tonight” by Eddie Money. There wasn’t one sole that was not on the dance floor for the last dance. The best part is that everyone sang the entire song word for word until the last note. We ended with “Wilson” by Phish, which was such a great end to a new beginning. Congratulations to the New Mr. and Mrs. Travis Wilson. Thank you for having us at your event.