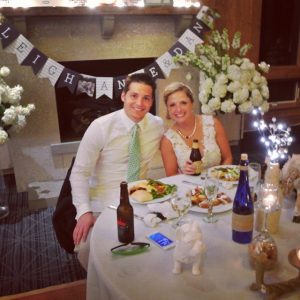 Jennette’s Pier was the perfect venue for a destination wedding on Saturday September 13th, as friends and family witnessed and celebrated Dan and Leigh Anne Caryll’s wedding with grand fanfare. Coastal DJ and Video was there to set the mood and get the pier hopping during the dance party. This is DJ Karl here to fill you in on the details.

Storm clouds looked on from a distance during the ceremony right on the pier, but held off just long enough for Dan and Leigh Anne to say their vows. They were even able to have some great pictures taken before coming inside the reception venue for the celebration. “Marry you,” by Bruno Mars, accompanied the grand entrance of the newlyweds and their wedding party. The couple then shared a dance to “All of me,” by John Legend. Dinner was fantastic and then the dance party followed after the cake cutting.

There was a toast given by two pairs of friends of Dan’s and Leigh Anne’s. The bride shared a dance with her father, and the groom with his mother before the dance party began. Music old and new with just a sprinkle of hip-hop kept all the guests entertained and grooving all night. The enthusiasm for “Country Roads” as the last dance song brought everyone together for one last healthy hoorah. It was an honor to be a part of such a special moment for these two families. Congratulations once more to Mr. and Ms. Dan and Leigh Ann Caryll!