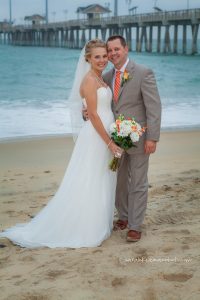 Andy VanVeen and Sarah Schultz brought a group of friends and family to Jeannette’s Pier in Nags Head last Friday, April 25th, to witness and celebrate their marriage to each other. Now they like to be called Mr. and Mrs. VanVeen. This is Karl with Coastal DJ and Video here to tell you about the event.

The wedding ceremony took place in the spacious main hall on the second floor of the North Carolina Aquarium Pier at Jeannette’s, and it could not have been planned any better. As the winds started kicking up on the beach, the vows were being spoken, and as soon as they each said “I do,” the celebration was underway. The room morphed into the stage for the reception as guests enjoyed cocktails and appetizers during cocktail hour. We would like to thank Sarah Keenan Photography for the wonderful photos. Once the wedding photos were finished and the room was ready I introduced the wedding party and the newlyweds. They enjoyed their first dance, and Sarah’s father welcomed and thanked everyone for coming.

Dinner was served by Kelly’s Catering and as always, they were on point. Once dinner was over the toasts by the Maid of Honor and the Best Man preceded the cupcake cutting and two traditional dances, the Bride and her Father, and the Groom and his Mother.

The dance party followed, and along with it came the storm. Lightning flashed through the windows as everyone danced in celebration of the newlyweds. We were inside and the power stayed on so the rain was no inconvenience as we kept on rocking right on through. As always, however, the party seemed to end way too soon. Well that’s OK because Andy and Sarah have each other to celebrate their whole lives with. How about one more big round of applause for Mr. and Mrs. VanVeen!