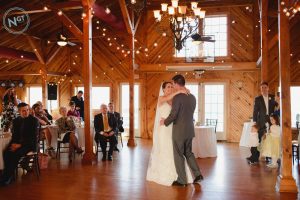 Kelly and Simon had their beautiful ceremony & reception on Saturday April 12, 2014 at the Hilton Garden Inn Pier House. Family and friends gathered outside on the pier at 5:00 p.m. for the ceremony. Music was provided by Leslie Erickson with Club Violin.

Rev. Jay Bowman officiated the wedding and as always
did a fabulous job. Kelly and Simon were announced as the new Mr. & Mrs. Prucnal. As soon as the ceremony ended, everyone moved inside the pier house for cocktail hour which was provided by Coastal DJ & Video. Brenda Zeigler with To Have and To Hold OBX and myself, lined up the wedding party for Introductions at 6:45 p.m.

The wedding party was introduced to a unique song chosen by Kelly and Simon called “Hoppipolla” by City of Prague. Following introductions Kelly and Simon enjoyed their first dance to “Thank You” by Chris Cornell. The father of the bride, Mr. Robertson, gave a quick welcome to all the guests just before dinner with a big congratulations to Kelly and Simon. A nice blessing was then given by Kelly’s uncle and godfather Ed.

We all enjoyed a great meal that was provided by the Hilton Garden Inn. After about 30 minutes into dinner the Maid of honor and Best Man gave their toasts to Kelly and Simon. A traditional father/daughter dance took place after dinner to “In my life” by The Beatles. We all joined for a round of applause for Kelly and her father as their dance ended. We then brought out the groom, Simon, and his mother Zofia for the mother/son dance to “Child of mine” by Carole King.

As the traditional dances ended we thought we would do something very special for Kelly’s grandparents that attended the wedding. Kelly had a beautiful song by Rod Stewart “It had to be you” that was played for an anniversary dance. Kelly and Simon were congratulated for being married for less than a day! As we eliminated each married couple from the dance floor, Kelly’s Grandparents were the last standing at 65 yrs. of marriage.

Open dance time took place just after the anniversary dance and we all celebrated and enjoyed plenty of fun party songs. This was a great wedding and everyone danced right on up till the end of the night. We would also like to thank Neil GT for a great job with the pictures. Congratulations to Kelly and Simon Prucnal once again on their marriage. Thank you for letting us all be a part of your special day!