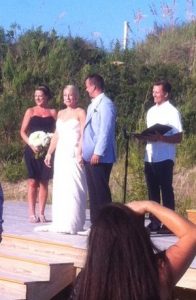 Stephanie Bogley and Eric Lundblad became Mr. and Mrs. Lundblad last Saturday, September 14, 2013 at The Sanderling Resort in Duck, NC. The lawn behind the dunes provided the perfect place for the ceremony.

Cocktail hour proceeded right after with a light island theme. Guests enjoyed music, games, snacks, beverages, and even a fire pit during cocktail hour on the deck behind the Event House. Once the Bride and Groom were finished getting the day captured on film, they joined their guests at the reception.

After dinner, traditional dances preceded the dance party. Once the party was underway, the dance floor was full for the remainder of the evening. Guests enjoyed 70’s, 80’s, and 90’s disco, pop, and rock. Modern artists provided current hits as well, and the mix kept all ages entertained. The Sanderling provided the perfect venue, and we provided the appropriate acoustic accompaniment.

Congratulations, Stephanie and Eric, and thank you for choosing Coastal DJ and Video as your Outer Banks Wedding DJ.